Pilasters and headers may be installed using the general installation instructions. 1. Trim the pilasters to the required length. With a one-piece pilaster, trim the plinth block from the base up. In the case of an adjustable two-piece pilaster, remove the plinth and cut from the base up and reattach plinth. In both cases, never cut the top of the pilaster when adjustments are needed. 2. To install pilasters, make sure they are flush with the top of the brick molding and positioned correctly on the jamb. This is critical to the appearance of the entrance system. 3. Verify the required width of header needed. If no adjustments are needed, install both edges flush with the edges of the pilasters. A header may be adjusted in width if the original header is longer than the required width. To do this, determine the length required and measure half this distance from each end. For example, if the original header is 58” and only 54” is required, cut 27” from each end. Install each side separately, and make sure they line up with the pilaster. Use a keystone to cover the seam.

Pediments & The Shim Board Application:

When using pediments, special preparation may be needed especially when installing the subsiding. It is not possible to run j-channel around some of the designs. Therefore, the siding must be installed first. For the most stable application and the most resistant to moisture a ¾” shim board should be mounted to the subsiding. A Nu-Wood flat board (see Flat Boards on the Moulding Products Page), or a ¾” wood board should be cut to 1-1/2” less in width and ¾” less in height than the header portion of the pediment. Once this board is mounted, flash this properly. Be sure to install j-channel and siding prior to mounting the pediment. Once the siding is installed, the pediment may be mounted to the shim board using Nu-Wood Adhesive and screws. This shim board method can also be used for the pilasters and headers. It guarantees the siding will not be restricted. It helps eliminate moisture filtration behind the opening and gives the entrance system a more massive look. If a shim board is not available, then the pediment must be mounted directly over the siding or brick.

Window headers are available in many different heights and can be sized to a necessary width. If the width adjustment is necessary, determine the correct width and mark from both ends of the breast board half the distance. To cover the seam, a keystone can be used. Window headers can be routed for j-channel when necessary although, when siding will be present a shim board is the recommended alternative.

If vinyl siding will be present, it is recommended that a ¾” shim board be used instead of having a window head routed for j-channel. Before the siding is installed, mount either a ¾” Nu-Wood board or a wood board directly to the subsiding. This board does not have to be the exact size of the header. It is best to be at least ¾” less in height. After properly flashing, the shim board siding may be installed and then the window header placed over the top. This technique also completes the appearance of the window header since it is brought out in front of the siding rather than flush with the j-channel.

Arches are available in most half round windows sizes. To measure for an arch trim, determine the width at the base of the unit. (This is the diameter of the half round) When siding is present, a flexible j-channel may be used around the arch. If the trim will be extended vertically down the side of another window, an end cap may be ordered. This creates a more finished seam where the two trim pieces connect. If the end cap will not be used, be sure to use Nu-Wood adhesive at the joint. Follow the general guidelines for other applications. Customer arches and ellipses are available.

With most applications, follow the general guidelines when installing sunbursts. Sunbursts can be routed for j-channel if necessary or they can be mounted over a shim board. If a shim board is used, it must be large enough to properly secure the sunburst to avoid wind damage. If mounted directly to the subsiding and if siding will be present, flexible j-channel should be used.

Gable vents may be ordered either as a functional or non-functional vent. Most can be routed for j-channel. In the case of the functional vent, the opening to the attic does not need to match the shape of the vent and should be smaller in size. It is often easiest to cut an undersized square or rectangular opening in the sheathing. Fasten the vent over the opening with both Nu-Wood Adhesive and screws/nails. Non-functional or closed vents can be installed using the general guidelines. In some cases it may be best to use a shim board. Undersize the board as a square or rectangle and install the siding. At this point the vent can be mounted over the shim board.

Typically, moldings should be installed directly to the sheathing or brick. Long lengths of molding will expand and contract leading to shrinkage over time. Always use a combination of Nu-Wood Adhesive and screws to help avoid some of this movement. When pieces will be joined together, be sure to square or miter ends and use Nu-Wood Adhesive at the joint. It is very important to fit each piece tightly against the other. This may be accomplished first by over sizing the length slightly. After applying the first piece, install the second piece beginning at the far end and forcing it against the first piece until it a slight bow occurs. Fasten the moldings starting at the far end moving toward the first piece. Then, fasten every 16” hitting the studs or a solid surface. Follow the general finishing guidelines when done.
Copyright 2020 Nu Wood Synthetic Architectural Millwork
×

Please enter your name and email to know more on how Nu-Wood products assist builders to increase their bottom line, through labor savings and more productivity, all while giving their customers the look, quality and durability that they demand 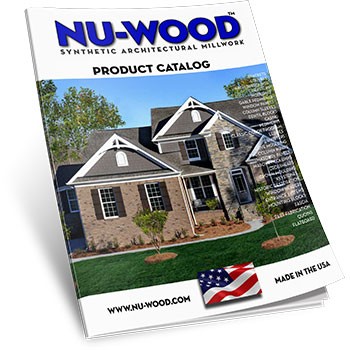